The Ulam-Warburton automaton is a simple growing pattern. See Wikipedia or this great Numberphile video for more information. For the more technical see this paper too.

I was curious what you'd get under various other versions of it, using the same basic rule of "turn on cells with exactly one neighbor" but with a tweak. For example, what happens if you a cell turns off after being activated for a few cycles?

You get this beautiful modification. I plan to follow this up more and will make code available then (although it's insanely simple). I would be curious what statements you can make about the periodicity and the number of active cells at any time. 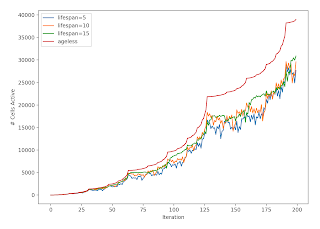 For example, empirically it seems that the number of cells in a "dying" version is always upper bounded by the ageless and standard Ulam-Warburton Automaton. Now, prove that and derive formulas (or prove it's not possible) for a generalized version.

Other ideas:
This whole curiosity partially started because I wanted to assign a simple proof about Ulam-Warburton to my summer discrete math class. I also have an affinity for fractals, who doesn't?

Posted by Marcus Hughes at 11:28 AM No comments:

Slides [ppt or pdf] for a presentation I gave on denoising images. Noise2Self is amazing.

Check out this video from the related Noise2Void:

Posted by Marcus Hughes at 12:11 PM No comments: