Here's the link.
Posted by Marcus Hughes at 10:52 AM No comments:

What if you use the depth in the RRCF instead? 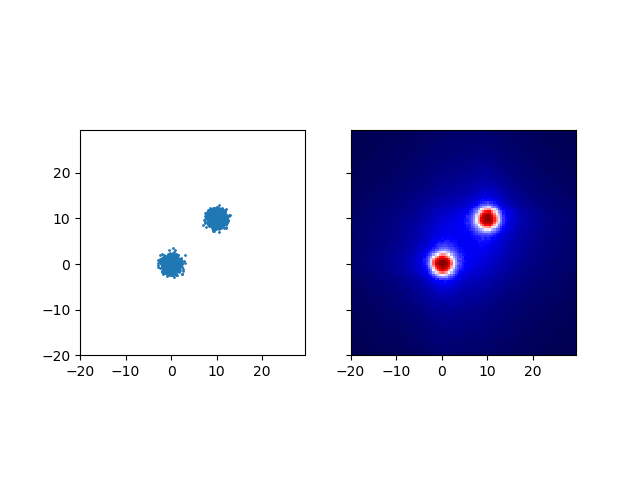 Posted by Marcus Hughes at 11:06 AM No comments:

There are minor artifacts created by choosing axis aligned cuts in RRCF, similar to what was noted with IsoForest.
Posted by Marcus Hughes at 7:19 AM No comments:

I had a glance through "Realizing the potential of astrostatistics and astroinformatics" by Eadie et al. (2019). While I do not feel qualified or informed to comment on the suggestions, I can summarize them quickly. There are three problems:


I was much more interested in the final section about potential themes in research:
I find the last theme incredibly broad and am unclear exactly how they mean it. It seems they're most interested in hierarchical representations of data. I would also claim that anomaly detection/clustering is important for reducing the volume of data.
Posted by Marcus Hughes at 12:00 AM 1 comment:

Training an autoencoder with mostly noise

I am working on a project where we wish to use anomaly detection to find what image patches have structure and which don't. As an aside, I ran an experiment on MNIST. You have 500 images of fives. You have 5000 images that are pure noise. You train a deep convolutional autoencoder. What you end up with is the following reconstruction:

The top row are the inputs and the bottom row are the reconstructions. You find images of fives even when nothing is present.
Posted by Marcus Hughes at 10:22 AM 1 comment:

I stumbled upon a game called Flood. It's a simple enough game. You start with a grid of random colors. Then, you change the color of contiguous region formed from the upper left corner until you have flooded the entire grid with one color. I wrote some code and have been tinkering around some.

The most naive solver is a breadth first search. So, I did that. Below you see the solution length for a grid size of varying size with only three colors. 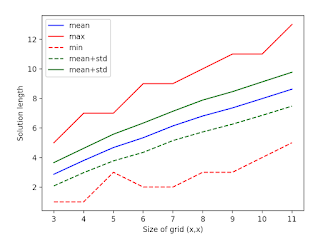 This search breaks down at large grid size because it's so slow. Some kind of heuristic approach would perform better, but can you prove it's within some epsilon of optimal? What is the expected optimal solution length? I think that should be proveable theoretically since you just have a uniform grid and can constrain the growth rate. I will likely return and do that.

I was explaining anomaly detection in non-stationary data to someone and threw together this crude example figure. The blue points are nominal and represent 90% of the points. The red are anomalous and represent 10% of the points. In this example, the red data is stationary while the blue passes through it. Thus, it would be very difficult to differentiate the red and blue points when they overlap. However, even if we only had a few frames of this video, we would like to be able to realize there are two dynamics going on.

The code for this is:

Posted by Marcus Hughes at 9:43 PM No comments: